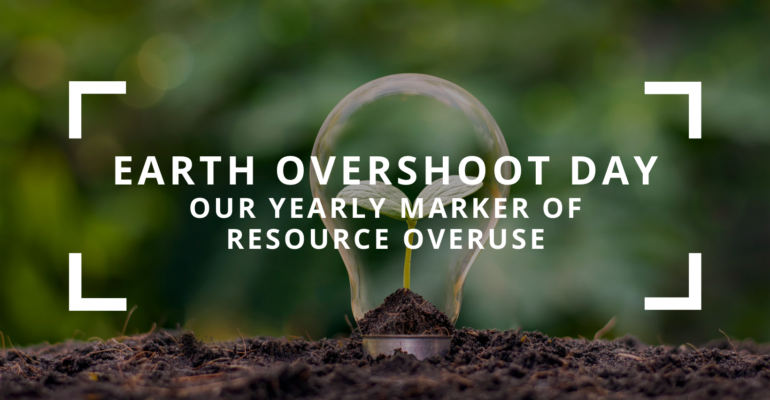 What is Earth Overshoot Day?

If Earth Overshoot Day is new to you, you may be wondering exactly what it is. This date is when the demand for ecological resources and services by humanity has exceeded what the Earth can regenerate in that calendar year. The deficit is maintained when our ecological resource stocks are depleted and waste is accumulated, the most prevalent being carbon dioxide released into the atmosphere.

The day is calculated by the Global Footprint Network, which is an international research organization whose goal is to provide decision-makers worldwide with the tools necessary to help the human economy to operate only within the ecological limit of our planet. The calculation is a relatively simple one. The Earth’s biocapacity is divided by humanity’s Ecological Footprint and then multiplied by 365. That number is the official Earth Overshoot Day. Biocapacity is represented by our planet’s biologically productive land. It is our supply. Our demand, the Ecological Footprint, is our population’s demand for food products, fossil fuels and space for infrastructure. Our demand always outweighs our supply.

In 2021 this date was July 29. The first calculated Overshoot Day was in 1970 when it took place on December 30. With each passing year, the date has gotten earlier on the calendar, the one exception being 2020 due to the global pandemic and its pandemic-induced lockdowns.

The concept for the day was conceived by a member of the UK think tank New Economics Foundation, Andrews Simms. It launched in 2006 and the World Wildlife Federation has been its partner since 2007.

Most of the countries that hit their day first will most likely not be surprising. They are those that are densely populated and known worldwide for their rates of consumption. Several have dates that are the same. The top five and their corresponding dates for this year are:

So what exactly do individual countries‘ Overshoot Days mean? They are the calculation as to which Earth Overshoot Day would fall if all of humanity consumed like the people in that country. This is not a list that a country makes a goal to be on the top of.

Not all countries will have an Overshoot Day, as many will never reach a point where their Ecological Footprint is greater than the global biocapacity per person. Many of these countries are in Africa, the Middle East, and regions with lower populations. They include Nigeria, Malawi, Nepal, and Haiti. You can find a complete list of them here.

How Can We Move Back The Date?

The hashtag #MoveTheDate is all about the belief that the current choices we make will determine our future and the planet’s future. The past Earth Overshoot Days don’t have to be this early in the calendar year.

We can all make measurable changes on a personal, local, national, and global scale to turn back the clock. Five key areas have been identified that define the long-term trends, each shaped by our choices both individually and collectively.

Each of these critical areas uniquely plays a role in how we can turn back our individual countries and overall Earth Overshoot Day. The two most prominent players are energy and food.

Our carbon footprint is 57% of humanity’s Ecological Footprint. The reduction of the carbon component of the Ecological Footprint by 50% would move the date back by 93 days. That’s three months! Only 150 years ago the carbon footprint was close to zero. It is quite a change in such a short amount of time relative to the age of our beautiful planet. Reducing our energy consumption can not only push back our date, it can help us address climate change in a meaningful way.

Did you know that half of the Earth’s biocapacity is used just to feed us? Reducing global meat consumption by 50% and replacing it with a vegetarian diet would move our Earth Overshoot Day back by 17 days. This is because animal calories are much more resource-intensive than plant calories when it comes to production. A great example of this is in Belgium. It takes five calories of fossil fuels to produce one calorie of meat in that country. By cutting meat consumption in half, we could also cut ten days off our methane emissions.

We would push back our planet’s Overshoot Day by eight days if we reforested 350 million hectares of forest. Our forests, oceans, lakes, and wetlands all support life on our planet and help keep humans grounded in more ways than physical. There are three ways to regenerate our biological resources: classical conservation, restoration, regenerative agriculture and sustainable fishing. This means preserving our parks systems, replanting forests, and protecting our waterways and oceans from pollution, overfishing, and other harmful practices.

By 2050, between 70-80% of all people are expected to live in an urban area. That makes smart city planning so crucial. Replacing the need for driving by 50% worldwide with public transportation, biking, and walking, we could move Earth Overshoot Day back 13 days. Not only would our planet be healthier, but so would we by moving our bodies more and spending time breathing fresh air instead of the air conditioning in our car. Our personal mobility makes up 17% of humanity’s carbon footprint and can be reduced much more easily than you think!

Population can be a sensitive subject, as many deeply ingrained cultural taboos and norms are associated with having a family. The current estimate is that by 2100 there will be between 7.3-15.6 billion people living on our planet. As medicine and technology advance, people live longer and are healthier for more of their years on average. To push back our Earth Overshoot Day by 49 days by 2050, every other family would need to have one less child and postpone parenthood by two years. Gender equality allowing women and girls to be more empowered is seen as a driving force in meeting this goal.

The numbers and percentages that affect our global Overshoot Day may seem overwhelming. Still, they paint a picture that the actions we take and decisions we make daily add up to monumental impacts on the future of the planet that we leave the generations to come. By making the right moves forward, we can start to repair the damage and roll the clock back on this date each year, with the ultimate goal being to see every country one day not even have an official Overshoot Day.

If you are interested in learning more about the ways you can help be the solution to the problems plaguing our planet, check out OEOO for more information on how to help support their cause and sign up for their newsletter.

A Brief Introduction to Security Information and Event Management (SIEM)