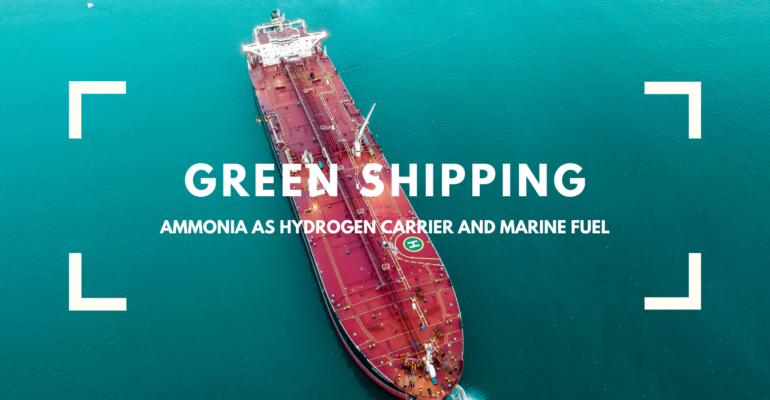 Ammonia is generated by combining nitrogen extracted from the air with hydrogen produced by water electrolysis powered by wind or solar energy. It may be a green fertilizer or, according to supporters, a clean, low-emission fuel for ships and planes.

As this colorless fuel is burnt, it produces no carbon dioxide. It’s plentiful and common, and it’s made with green energy, water, and air. It can be used in both fuel cells and internal combustion engines. It does not require the use of high-pressure tanks or cryogenic dewars, unlike hydrogen. It also has a 10x higher energy efficiency than a lithium-ion battery.

Why Ammonia should be used as fuel?

Maritime transportation contributes significantly to greenhouse gas emissions. Maritime Shipping on the world’s oceans is reportedly responsible for about 2.6 percent of global CO2 emissions, according to data given by the German Environment Agency (UBA). In 2015, about 932 million tons of CO2 were released, and this number continues to rise year after year. Countermeasures are needed.

The use of green ammonia instead of traditional fuel oil may be a cost-effective way to reduce greenhouse gas pollution from ships. The energy density of liquid ammonia is around 18.6 MJ/kg, which is one of its properties. It is far less expensive than today’s marine oils, natural gas, and LPG. As a result, ammonia has a reduced energy density. Ammonia has the benefit of being able to be contained in a liquid state at higher temperatures and under air pressure.

Ammonia can be produced using renewable energy sources, and since it produces no biomass, it does not emit carbon dioxide when burned. It can be generated and used without emitting any carbon dioxide, which is a big plus in our search for a healthier, more prosperous planet.

How Ammonia is made?

Ammonia is produced at a cost of around $55 billion (£42 billion) per year, primarily for fertilizer. However, the sector has a significant environmental impact, contributing 1.8 percent of global CO2 emissions. Fertilizers may also harm water and air quality. Nitrogen and hydrogen gases are needed for the production of ammonia. Hydrogen is often derived from natural gas (methane). The method emits carbon which necessitates a large amount of power.

Ammonia is being produced in new, more environmentally friendly forms. Blue ammonia is one process that involves trapping and preserving carbon. Green ammonia, which is more promising, completely replaces the use of fossil fuels.

A brand-new pilot plant in Foulum, in the heart of rural Jutland, western Denmark, is conducting research. Haldor Topsoe, a company that manufactures ammonia catalysts, is working with scientists from Aarhus University to create ammonia from water, air, and renewable energy. Instead of using fossil fuels, wind and solar energy are used, and within minutes, liquid fuel is available on the other end.

The concept of using ammonia as a fuel is not uncommon, but it has only been used in a few instances due to significant challenges. It doesn’t combust very well and burns slowly and to bring things to work, you have to be cautious about the temperatures and pressures. Ammonia as a marine fuel presents major, but not insurmountable, technological and safety problems. The origins of ammonia and the potential expense of green ammonia are also obstacles to acceptance. Almost all ammonia in use today is made from hydrocarbons, which has little benefit in terms of carbon abatement while increasing prices.

Green ammonia, on the other hand, created by electrolysis using renewable or nuclear energy, is a great source of zero-emission fuel if NOx (nitrogen oxides) emissions are properly handled. Green ammonia is currently manufactured in marginal quantities, and a major investment campaign will be needed not only to generate a meaningful supply of green ammonia but also to bring down the costs of doing so, making the fuel commercially feasible for the shipping industry.

The ‘AmmoniaMot’ (Ammonia Engine in German) project has started at MAN Energy Solutions. It was started by MAN in collaboration with industry and research institutes to identify the steps required to develop a dual-fuel, medium-speed engine that can run on both diesel and ammonia. The University of Munich, Neptun Ship Design, WTZ, and Woodward L’Orange are among the project participants, which will run for three years starting in December 2020, with funding from the German Federal Ministry of Economics and Technology (BMWi).

Another project has also been started in the Thermodynamics institute of TUM. Within the project’s framework, experimental investigations will be conducted on the Institute’s broad Rapid Compression Machine, and a numerical system suitable for use in the industrial production phase will be developed.

Fraunhofer researchers are focused on developing ammonia-based fuel cells as part of an international collaboration. An interesting prospect is being investigated by the Fraunhofer Institute for Microengineering and Microsystems IMM in Mainz. The Fraunhofer Institute is working with 13 European consortium members on the ShipFC project to build the world’s first ammonia-based fuel cell for ships. The SFC project aims to demonstrate that the latest emission-free propulsion system can be used efficiently, effectively, and seamlessly in large ships over long distances.

As part of the maritime energy transformation, MAN Energy Solutions is building a fuel-flexible, two-stroke ammonia turbine. Green ammonia is one of the synthetic fuels that will be crucial in developing a more environmentally friendly shipping industry in the immediate future. By 2024, MAN Energy Solutions hopes to provide a commercially viable two-stroke ammonia turbine.

Using ammonia as a fuel for the maritime and shipping industry would be beneficial for all stakeholders. Thus, steps should immediately be taken to replace other sources of fuel with green Ammonia so that the environment can be saved and we can live in a sustainable future.

Minimalism and sustainability: why they go hand in hand

The Role of Green Software Development for the Environment