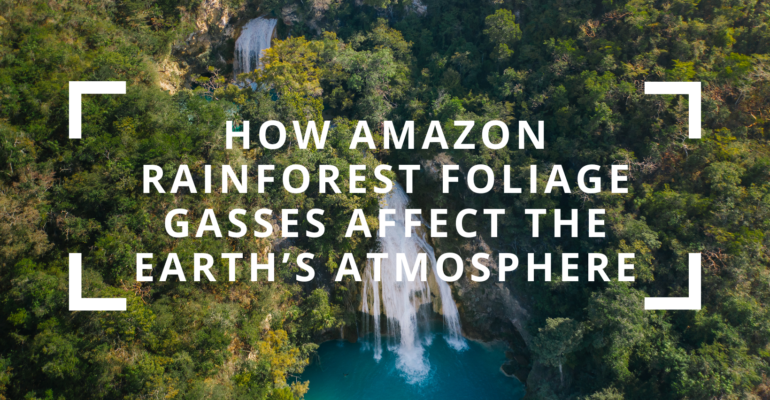 Amazon trees play a vital role in making the earth worth living. They are regarded as the „Lungs of the Earth” because of their capability to absorb CO² from the atmosphere and releasing O². Their process of absorbing CO² and releasing O² has been discovered to aid in breathing and is also considered as a beneficial addition to the environment. Hence, they are among the major trees in the world that help cushion the climate and maintaining it at an optimal level.

Referring to the Amazon as the „lungs of the earth“ has a great underlying meaning. In other words, they play the same role as the lungs in human body.

Here is how these plants affect the earth and how deforestation will affect it.

How does the Amazon Rainforest Affect the Earth’s Climate?

Side Effects of Amazon Deforestation

Carbon Addition to the Atmosphere

As Amazon trees absorb maximum carbon and store it in the form of glucose, their burning or degeneration will release the carbon back to the environment.

According to a research by Global Change Biology held in 2014:
„Forests that experienced disturbances such as logging and fires stored 40% less carbon than undisturbed forests. „

The Amazon Rainforests are homes to many wild animals. Cutting or burning down these trees will affect these animals too rendering them homeless and a threat to the environment.

Carbon addition to the environment, global warming, and the greenhouse effect resulting from deforesting the Amazon forests will lead to a disturbed climate. It will not only increase the temperature of the atmosphere, but will also lead to a drier climate.

The Amazon trees act as a natural air filter. This is through their ability to absorb CO² from the climate and releasing O² which is necessary for breathing. The processes with which they have removed CO², which is considered as toxins to animals and human beings, thereby providing us with a safer environment free of poisonous air can be recorded as a feature of its importance to the earth’s climate.

According to the earth scientist at PNNL and principal investigator of the study, Manish Shrivastava:

„The tropical Amazon rainforest constitutes the lungs of the Earth, and this study connects natural processes in the forest to aerosols, clouds, and the Earth’s radiative balance in ways that have not been previously recognized.“

Shrivastava’s statement further buttresses the real importance of the Amazon Rainforest for the earth’s climate.

However, Amazon tree plantation proves very effective against the greenhouse effect and global warming. It counters global warming and maintains the world’s atmosphere.

Plants in the rainforest absorb a maximum quantity of the CO² from the air. They utilize this carbon to make food through photosynthesis. The food produced is stored in the form of glucose which is rich in sugar. Maximum carbon storage in such trees lowers the global warming and greenhouse effect.

The Amazon rainforest pulls the major gas from the atmosphere that causes global warming, so it’s the major player in global atmosphere control. Every tree help in making the environment worth living and Amazon forests are no more an exception.

The Amazon Forest helps in cloud formation through a conspiration with water. These clouds provide the earth with moisture.

Because of its dense nature and its varieties of options, the Amazon rainforest acts as a home to millions of wildlife, providing each of them the required environment they need to strive.

Amazon rainforest foliage gasses affect the earth’s atmosphere to a great extent. Foresting has great positive effects on the environment. However, deforestation also brings many negative effects. As a matter of fact, they are truly the „lungs of the earth“.