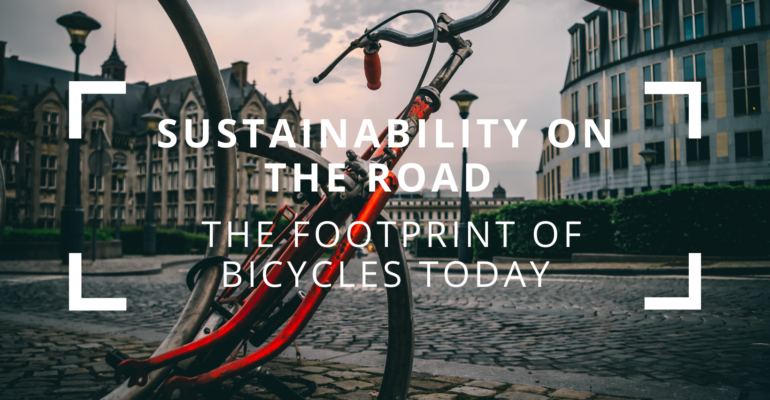 It is estimated that there are more than a billion bikes on our planet today. That is a whole lot of people getting around on two wheels. While many of these are traditional bicycles, there are increasingly more electric bikes out on the streets today. Although this may seem like a relatively new trend to our markets, the first electric bicycles were documented as far back as the 1880s with patents in both France and the United States.

Electric bike popularity has surged, but a big question is if this increase in popularity is taking a toll on our planet in its effect on C02 emissions and waste created. Convenience comes at a cost to the environment, and we have to be mindful of how these electric bike purchases have the potential to cause more harm than good if we don’t make thoughtful choices.

Each day over 360,000 bikes are produced and another over 45,000 sold. These are just estimates and may actually be much higher than anticipated. The footprint of all these bikes built can be significant when considering the sheer volume produced and multiplied by its carbon output during manufacturing. According to Trek, one of the world’s largest bicycle brands, building a basic model of an entry-level mountain bike emits about 100 kg of CO2e. For e-bikes, their figures show that electrifying any bike adds about 65 kg of CO2e to the production emissions. That means a basic commuter e-bike would produce about 165 kg of CO2e before its wheels ever hit the pavement.

To offset that footprint would mean riding an equivalent of about 430 miles that you would have driven in a car. Riding a bike of course has a much smaller footprint than driving a car. However, one of the questions is how many bikes are needlessly being discarded, the reasons why, and how that can be directly impacting our environment. Over 50% of the world’s population knows how to ride a bike, and the number of bikes globally is set to double by 2050. At that rate, the footprint in product and operation will have a significant impact.

It is a rough estimate, but about 15 million bikes are discarded every year. Unfortunately, most of these end up in a landfill. The sad fact is that although parts do wear out and need to be replaced when properly maintained, a properly cared for bike frame can last its owner’s lifetime. So why are all of these bikes discarded and not cared for and supported the way we care for our cars?

This is due to many factors, but the cost of parts, maintenance, repair, and the lack of knowledge of how to do self-maintenance is a large part of the problem. The average cost per year to maintain a traditional bike is approximately $100 versus $150 for an e-bike. This may not seem like much, but battery maintenance is where e-bikes can get expensive. Years 1-3 typically cost a user nothing, but years 4-10 jump up to $200 per year. Traditional bikes lack that jump in maintenance cost due to a battery.

Many people simply do not feel comfortable doing the maintenance themselves, and bicycle repair shops can be scarce depending on where a person lives. The fewer bike shops, the more expensive services may be, and the longer the wait time. That is never more true than with all the new technology in electric bikes that some bike shops cannot assist with or keep up with advancing technological changes to batteries.

Just as with a vehicle, regular maintenance and care can mean a longer lifespan of a bicycle. If more owners would make simple decisions, like wiping down their bike and its components regularly and having it professionally tuned up every few months when the season changes, many bikes would be saved from the landfill. This goes for both traditional and electric bikes alike. Like so many things, an ounce of prevention is worth a pound cure. The prevention of maintenance can mean a sustainable mode of transportation with less CO2 emissions and better health for global residents.

Mainland Europe dominates the world regarding the per capita bikes to citizens. The Netherlands, Denmark, and Germany all have populations where 75% or higher are cyclists. Copenhagen in Denmark sees 62% of its population use a bike to get to work every day, meaning the sustainability of their city and its green movement are far above many other Western countries. A massive 99% of its over 16 million citizens are bike owners. The UK and US lag far behind, with 16% and 32% of their population on bikes. They are heavily car-dependent.

Is it all that surprising to see Denmark and the Netherlands routinely land on the list of the happiest countries in the world? They are maintaining their physical health and mental health by engaging in daily exercise and taking in fresh air that has not been recirculated in a vehicle. The UK and US sadly do not even make the top 15.

According to the World Health Organization (WHO), worldwide obesity has tripled since 1975, and upon the last data in 2016, 39% of adults over the age of 18 years old were overweight, a frightening 13% of them obese. Even scarier are the facts regarding children. Thirty-nine million children under the age of 5 will be overweight or obese in 2020. This is preventable and directly correlated to poor eating habits and a lack of physical movement. Electric bikes have now removed the need to pedal a bicycle.

In an increasingly sedentary world, there is no better time for an actual bicycle that requires fewer CO2 emissions to produce and run, is cheaper to maintain and repair, and gets our hearts pumping and our legs moving. This brings up an important point of reflection on traditional bikes versus e-bikes, which is having to take a hard look at the reason for purchasing an electric bike.

Is the purchase being made out of a want versus a need?

For those able to ride a traditional bicycle, there may not be much reason for an electric bike. These purchases are being made solely out of the desire for something because it’s newer or has the latest technology. For the elderly or those with conditions that make operating a standard bike impossible or create a higher level of burden, an electric bike is a viable option and a wise choice.

Whether for commuting or leisure, bikes can be a fantastic way to get from place to place, breathe in some fresh air, and get a great workout in. When purchasing and operating one, it’s essential to become an educated consumer—treating them like investments instead of easily disposable toys.

The technology that progresses in the world of electric bikes is wonderful, but it’s important to remember that traditional bikes have been holding their own for hundreds of years, and rightfully so. We all must make wise decisions about whether an e-bike whose carbon footprint is 14g/km is about convenience rather than need. It can go a long way to ensure that bicycles continue to be a model of sustainability on the road.

How To Convert Markdown to Beautiful PDF